Transmuting the Desert into Farmland 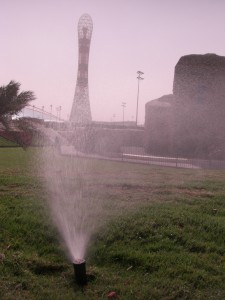 Irrigation in the Aspire Zone

It sounds like a fata morgana, but it becomes a reality. An area about fourty kilometers south of Doha is designated to be the testing ground for an improved fertility. For more than five million Dollars the Sahara Forest Project is intended to prove, that technical support can help nature to be productive in numerous ways. Food, drinking water and an additional yield of renewable energy. All this can be achieved hand in hand.

A parabolic solar power station is the heart of the construction. It produces electricity which is used for the desalination of sea water. A supplementary evaporation technology generates water for the irrigation of areas of arable land and greenhouses. Barley, arugula salad and cucumber are among the plants to be harvested. A step towards autarky, even now 90 percent of food have to be imported.

The task is not easy because this is one of the dryest landscapes on earth. Nearly every drop of drinking water has to be puryfied from sea water. The water supplies last for only two days.
The pilot plant is intended to hedge the water supply and to improve the domestic farming activities. It is the first step to a much bigger complex. The target-setting is to gain 135 million liters of water daily from June 2015 on. Further steps may someday allow more than 3 billion liters.

Desalination with reverse osmosis needs lots of energy. A gigantic solar power station will deliver almost two Gigawatt. With high pressure the water must be pressed through special diaphragms. Their design allow only water molecules to pass. Minerals are delayed in the filter.