The New Generation ascends the Throne 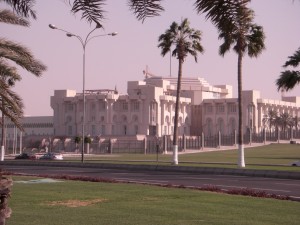 During the last years Qatar has gained its importance in international diplomatic relations not only in the gulf region. The community has impressively developed its future-oriented infrastructure. Thanks to the enormous natural gas deposits, Qatar belongs to the worlds wealthiest regions. This allowed the country to renew itself in record time. With just twohundredfifty thousand native citizens the population is reletively small. But thousands of foreign specialists help for the fast growth. Which amounts to a total of about 2 million people staying in Qatar.
Lots of courses have already been set for the future. Qatar has established to be a respected partner in international diplomacy. The sports infrastructure is recognized to be on world’s top level. The reputation as a top location for international political and economic conferences and meetings has well established.
Since 1995, which means for the last 18 years, Hamad bin Khalifa al-Thani has reigned the country. But now, at the age of 61 years, he came to the conclusion that it is time to retire. This also allows him to go a bit easy on his health.
The Emir has decided to put the government business into his son’s hands. He is convinced that its time for a generation change. The political responsibility and fate of the Emirate is to be continued with a wind of change.
Tamim bin Hamad al-Thani is the fourth of his sons and he is 33 years old which means he is in his prime. And he will be the youngest ruler in the gulf region. He is well educated and experienced. His education included a training at the Sandhurst Military Academy. He has two wifes and is the father of six children.
The handing over will be a honorable ceremony with a television speech to the citizens. It just remains to wish good luck for the Royal House.
Dieser Beitrag wurde unter Country, People, Places abgelegt und mit Age, Change, Children, New Generation, Palace, Period, Royal Family, Son, Throne verschlagwortet. Setze ein Lesezeichen auf den Permalink.